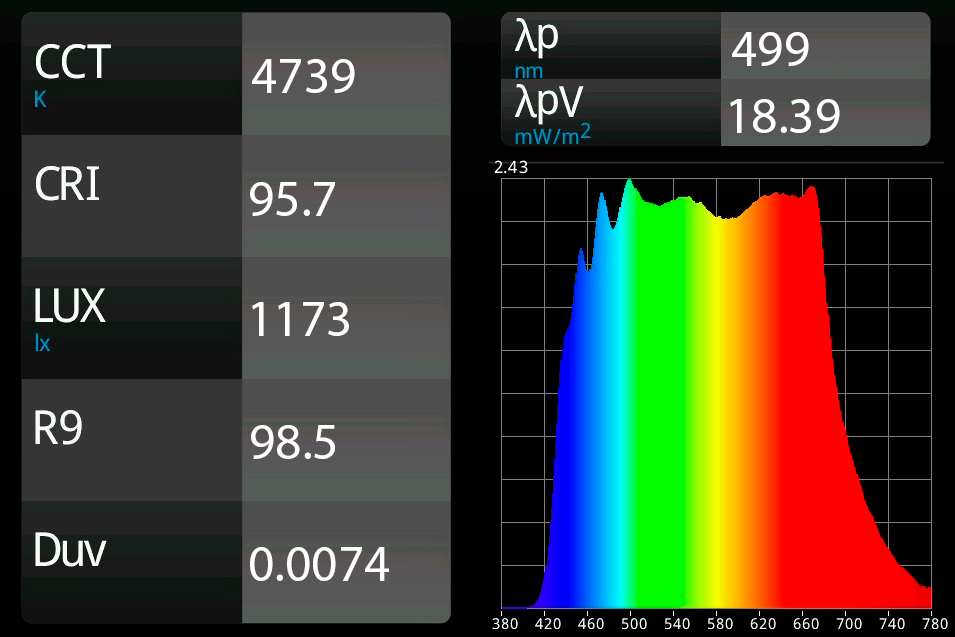 The intensity of the emitted light in the procognitive region (460-500 nm with maximum at 480 nm) of Spectrasol illumination is balanced with the light energies of the surrounding wavelengths, i.e. the spectrum is continuous. Other white light sources have a typical drop in this area or suffer from high radiation intensity in the HBL area (harmful blue light) as side effect of an effort to balance the spectrum (415-455 nm)1.
To understand and define circadian efficacy and procognitive action, we define two regions in the visible spectrum (from violet to red) wavelengths:

Melanopsin has an absorption maximum ranging from 464 to 484 nm, sometimes reported as low as 447 nm [24]. This maximum is not precisely defined yet – this is not only due to the different methodology of the studies, but also due to the fact that melanopsin exhibits bi-stability, which may affect its spectral sensitivity [24,25]. In addition, there are at least five types of ipRGC cells that differ in their morphology and function. Other photoreceptors may also play a role in the non-visual system – an effect not fully described yet [23]. However, despite these complex interactions and effects, most scientific data show that the maximum lies in the region of around 480 nm [23,24]. Since the melanopsin absorbance is defined by a function and not a specific point, the melanopic procognitive region can generally be defined as the range 450-500 nm and especially 460-490 nm [22-24]. Stimulation of melanopsin during the day is essential for circadian entrainment, alertness and cognitive performance [26-30]. Exposure to a balanced full-spectrum light without any dips in the melanopic region is therefore extremely important during the day for circadian entrainment, mood, alertness and cognitive performance [22-24,27,31,32]. This is also why the International Commission on Illumination (CIE) recommends maximising exposure to full-spectrum daylight during the day not only outdoors, but also indoors [32].

An unbalanced discontinuous spectrum usually has a low insufficient CRI value with LED sources typically lacking in red spectral emission. CIE confirms that light that is insufficient for the visual (sight) or non-visual system of the eye, or light that has an imbalance between the effects on both systems or is inadequate for one or both systems, can harm human health [32].

Summary and comparison of the procognitive effect of light sources

The procognitive light source effect describes the effect on the non-visual system of the eye, i.e. the quality of radiation in the circadian cyan and neighbouring blue and green regions, also known as the melanopic region. It is a region defined by 460-500 nm (with a maximum at 480 nm) that signals the human brain that it is in fact daytime. As a result, it entrains the circadian system and supports wakefulness and cognitive performance of the brain.